In December 2021, NZAEL launched the latest round of enhancements to its genetic evaluation system for dairy bulls.

This round of improvements, collectively referred to as NZAEL 3.0, includes new data filters and model updates based on research findings and farmer feedback, as well as significant investment in the software and systems used in the evaluation.

As always, these changes have been rigorously tested by the Farmer Advisory Panel (FAP) and internationally peer-reviewed by the Scientific Advisory Committee (SAC) before final sign-off from the NZAEL board.

LIC and CRV work closely with NZAEL, and their partners, and are incorporating the latest enhancements from NZAEL 3.0 into their in-house genomic evaluations, MINDA and MyHERD reporting systems.

Expect to see further NZAEL improvements in the pipeline, the next of which is scheduled for April 2022.

What to expect when NZAEL 3.0 launches

The annual update in economic weightings in the Breeding Worth (BW) index has been moved from February to December, and this will coincide with the NZAEL3.0 launch. This means not all changes in BW values and sire rankings at launch time are due to the new NZAEL 3.0 model improvements.

Higher milk returns have meant that the economic values used to weight the fat and protein breeding values, have both increased by nearly $1/kg in the Breeding Worth index. There have also been increases in the economic value weightings for Fertility, Body Condition Score (BCS), and a stronger penalty for Somatic Cell Count (SCC). Overall, these annual updates to farm revenue and costs are driving about half of the reranking in sires that will occur when NZAEL 3.0 launches.

When the NZAEL 3.0 model improvements and the updates to the economic value weightings are implemented, the average bull will see an increase in its breeding worth value. The BW values for the most recent cohort of high-reliability sires, born 2010-2019, will gain $34 on average. This means breeding worth values for young stock, such as replacement heifers, are likely to increase after the NZAEL 3.0 launch.

The graph below shows the average change in BW for bulls born after 2010 with a BW reliability of at least 75%. 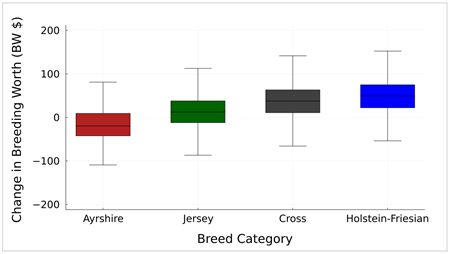 Older bulls are also expected to show an upward trend, although some older Jersey bulls’ values may devalue due to a higher economic weighting on milk solids and changes in the BCS breeding value (more info on the BCS change below).

Due to the nature and the number of changes/updates included in the release of NZAEL 3.0, farmers will no doubt have queries regarding their individual herds. Breeding companies will be able to assist their customers with understanding these new changes.

The Bull Search enables you to find the latest information on AE enrolled sires.

The RAS list is a ranking by Breeding Worth (BW) of sires nominated by AB companies.

NZAEL 3.0 Queries
If you have a query that isn't answered in our web pages, please email support.nzael@dairynz.co.nz. Include an identifier for any animals in your enquiry along with your contact details. We will respond as promptly as possible.