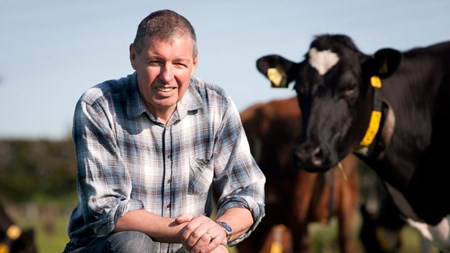 Hon John Luxton stepped down from the role of chairman in November 2015 after more than a decade of service to DairyNZ, and a lifetime of service to the dairy industry.

Mr van der Poel and Dr Mackle say he will be remembered for his longstanding, unfaltering contribution to the rural sector, particularly dairy.

“John has had a major role in the success of New Zealand’s dairy industry. John has always demonstrated strong leadership and longstanding commitment to the sector,” says Mr van der Poel.

“John was instrumental in a number of significant policy and legislative changes in New Zealand, including the foundation policy work that led to the formation of Fonterra and the deregulation of producer boards.

“One of his major achievements was shaping the development of DairyNZ – the first industry-good body of its kind and the largest in Australasia.”

Hon John Luxton played a major role in helping guide the dairy industry through a significant period of change, which would soon become New Zealand’s number one export industry.

He was instrumental in supporting a successful, viable, competitive dairy industry in New Zealand, with the sector employing 42,240 people and contributing $13.2 billion to New Zealand’s export revenue during his time as chair of DairyNZ.

Dr Mackle says he will remember Mr Luxton for always being very supportive and being a statesman and diplomat who could bring people together.

“John was an influential leader who unified the dairy sector from dairy companies through to local and central government departments,” he says.

“He led by values, had enormous integrity, and always put the best interests of those in the rural sector first. We will miss him.”

Mr Luxton’s achievements during his time as chairman include launching a new strategy for sustainable dairy farming and a new water accord in 2013 alongside former Prime Minister John Key, championing investment in research and development to improve on-farm innovation and the competitiveness of the New Zealand dairy industry, advocating for education and the ongoing investment in people to improve the skills and capability within the industry.

He was also key in establishing DairyNZ’s role in policy and advisory, establishing the Waikato Dairy Leaders Group and chairing the industry leader’s forum, and leading a record dairy levy vote in 2014, increasing levy support from 75% in 2008 to 82% in 2014.

Mr van der Poel says he was instrumental in guiding a generation of rural leaders, many of whom have gone on to hold leadership roles within the sector.

“From myself personally, but also from the whole Board, we will always be indebted to John for this contribution. His legacy will live on. It was a privilege working with John and we send our deepest sympathy at this very sad time to his family,” he says.

From research and the services we provide, to education, policy and the Dairy Industry Strategy, there's so much to discover in this section.