New Zealand dairy farmers today are more productive than ever thanks to the ongoing development of genetically-superior plant species. But how does our country’s rate of genetic gain stack up internationally? And what challenges do we face in our efforts to breed forages that not only provide better yield, persistence and feed quality, but also reduce our environmental footprint? 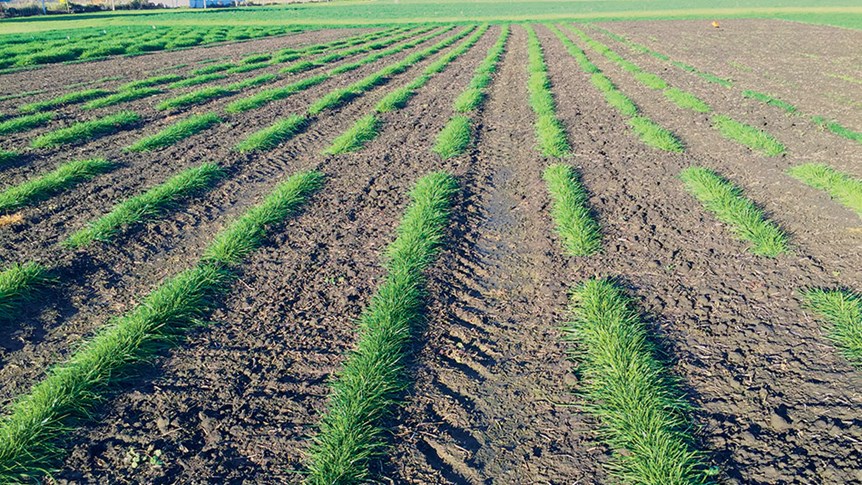 Row evaluation of hundreds of experimental progeny and ryegrass varieties. 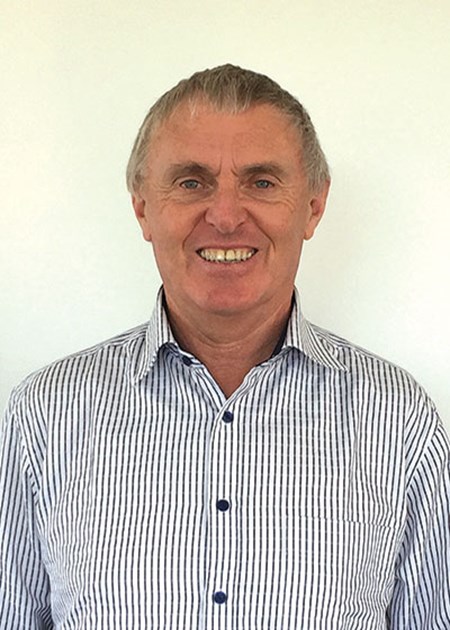 The international competitiveness of New Zealand dairy farming depends heavily on low-cost pastures and fodder crops fed in-situ. While perennial ryegrass and white clover are the most widely-sown pasture species, others such as brassicas, lucerne, chicory, plantain, fodder beet and maize are used to fill seasonal feed gaps. The genetic improvement of all these species, along with the genetic improvement of dairy cows, are essential for providing sustainable long-term productivity improvements for dairy farming.

Although many of our pasture species are also bred overseas, New Zealand has unique requirements that mean, in general, our perennial cultivars must be bred locally. There are no climatic zones in Europe similar to northern New Zealand, and no regions in the world with the same pest spectrum. Plant breeding is a long and complex process, typically taking more than a decade for new cultivars to reach the market.

In addition, no other country breeds ryegrasses containing the endophytes necessary for our conditions and most countries breeding perennial ryegrass have much colder winters. There are no overseas-bred cultivars with a high level of performance in DairyNZ’s Forage Value Index (dairynz.co.nz/FVI). Similarly, for clover breeding, few countries depend upon white clover as much as New Zealand does. Our country is also unique in breeding and using forage chicory and plantain.

About $40 million/year is invested in the plant breeding industry across many species. Plant breeding is a long and complex process (Figure 1) – few cultivars are developed in less than 10 years and each cultivar costs more than $1 million before it reaches the market. Perennial ryegrass breeding is particularly complicated due to the presence of endophytic fungi (e.g. AR1, AR37) and the need to incorporate these into the cultivars. Therefore, perennial ryegrass breeding programmes must also be supported by endophyte development research programmes. Fortunately, we are in a very good position in New Zealand, due to our legislation and funding models. 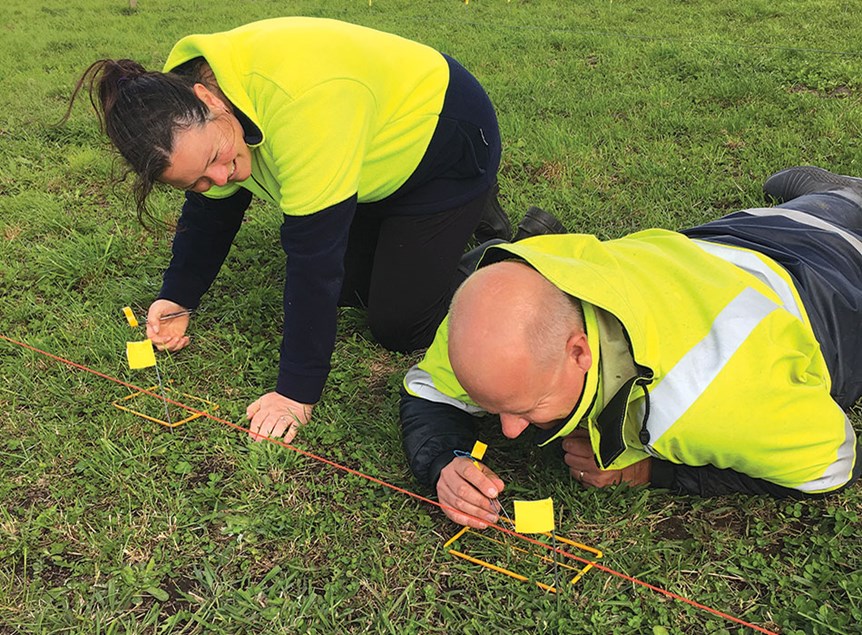 DairyNZ researchers measuring ryegrass tiller density for the Genetic Gain experiment. This experiment will determine how much gain has been achieved in pasture production from perennial ryegrass breeding in New Zealand.

How do we measure success?

The success of any forage breeding must be assessed in terms of farm productivity gains. In practice, yield, forage quality and persistence are usually assessed in replicated plots under cutting or grazing, with verification on-farm. To be good enough to make it to farmers, a plant cultivar must:

Mean annual yields of new perennial ryegrass varieties, and their associated endophytes, have improved by more than 2625 kilograms per hectare (kg/ha) (19 percent) since 1990, equating to an average genetic gain of 0.76 percent/year. Breeders have concentrated their efforts on providing additional cool-season growth and on improving performance in and recovery from dry summers. These efforts have resulted in a winter genetic gain of 1.0 percent/year, compared with 0.8 percent for early spring, 0.5 percent for late spring, 1.1 percent for summer and 1.3 percent for autumn1. Part of this lift in summer and autumn performance has resulted from improved endophytes, such as AR37, providing better insect resistance during summer and autumn. 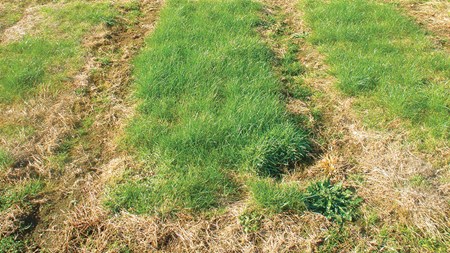 Similarly, white clover yields in ryegrass swards have improved by more than 1.0% per year2, an excellent achievement considering the increased production and competitiveness of the modern ryegrass/endophyte combinations.

The increase in dry matter production from ryegrass swards, attributed to genetic gain, is estimated to contribute an additional $15 to $20/ha in farm profitability compounded each year since 19903. Adding other traits to the analysis could increase this. Conversely, in some regions such as the upper North Island, the environment is limiting the persistence of new cultivars so these gains cannot always be captured. The factors limiting persistence are complex: plant survival can be influenced by insect pests, endophyte type, overgrazing, genetic effects, soil effects, pasture pulling, grazing management, weeds, warm summer temperatures, drought, pugging, diseases and local environment. To date, there is little evidence that the increased yields gained from breeding have led to reduced persistence – indeed some modern cultivars are more persistent1,4.

To improve persistence, breeders select plants and endophytes under the most stressful conditions of drought, grazing and insect pressure, across different soils and often in northern New Zealand. The breeders evaluate performance over many years and under varying grazing conditions. However, in many difficult environments it may be necessary to use alternative species to ensure persistence. 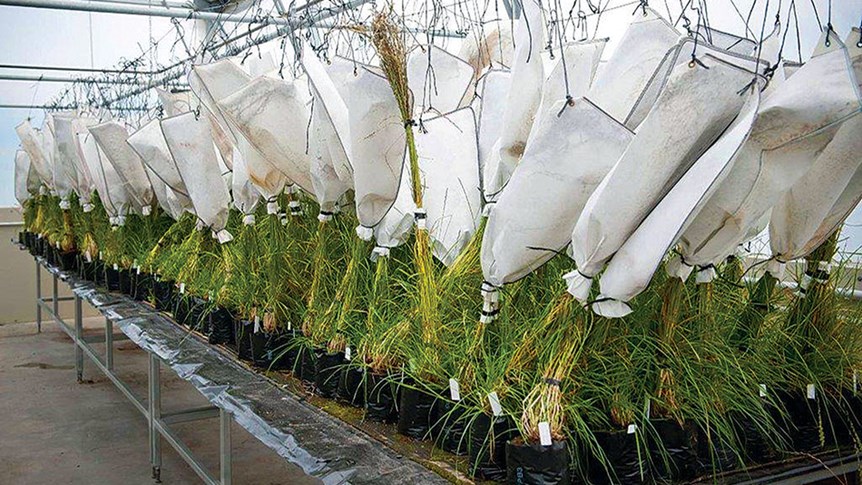 Crossing of perennial ryegrass plants in the glasshouse.

Given our funding model, how does genetic gain in New Zealand compare with that achieved overseas and with large international breeding programmes for crops like maize? In Ireland, where endophytes are not used, genetic gain for perennial ryegrass yield has been 0.35 percent/year to 0.52 percent/year, depending upon management6. Meanwhile, genetic gains as high as 2.3 percent/year have been achieved for major crops such as hybrid maize grain7. That is because maize receives multimillion-dollar annual investments in breeding, perhaps more than a thousand times larger than for ryegrass, with cultivars developed as hybrids to capture the hybrid vigour. As yet, hybrids are only in the research phase for ryegrass due to difficulty creating ryegrass hybrids. 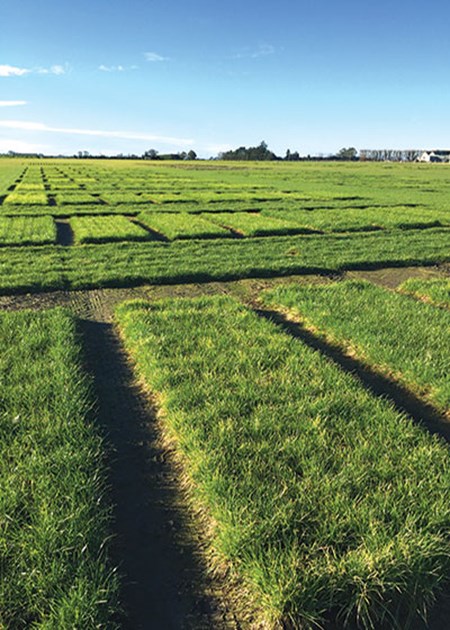 It is fair to say New Zealand pasture breeding has made reasonable progress, considering that pasture breeding is complicated and must account for endophytes, multiple grazing events (perennial versus annual crops) and diverse swards, and that it has a significantly smaller budget compared to major crops. Yet, our rates of genetic gain must improve further to ensure pasture performance meets the demands from animals of higher genetic merit, an array of stresses, increased climatic variability and increasing environmental concerns.

Currently, breeders use a range of strategies to increase genetic gain and persistence, including:

The future breeding of forages faces many challenges. It will be essential to increase genetic gain for yield, persistence and feed quality, while at the same time reducing the environmental footprint of all species used on farm. Plant breeding programmes take many years, so it is crucial that changes are incorporated early to meet future demands in a changing world. Ensuring access to all suitable germplasm and endophytes, and adoption of new molecular technologies such as genomic selection, will be vital for successful plant breeding programmes. 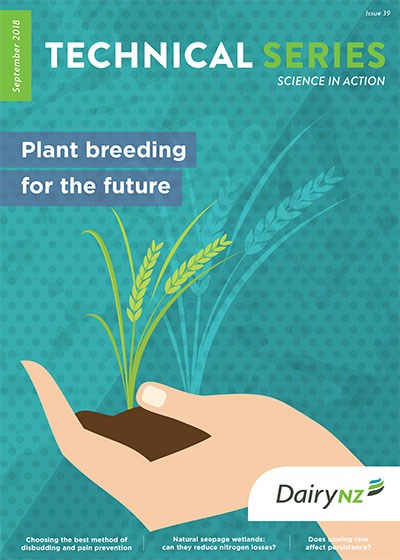