Following the government’s September release of proposed freshwater regulations, DairyNZ initiated three studies into the potential economic effects of the Essential Freshwater proposals. Two of these economic studies are independent and all three have been peer-reviewed.

The economic studies are supported by additional technical research by DairyNZ which analyses the likely water quality improvements. DairyNZ’s full submission will be released by end of day Thursday, October 31.

“The economic modelling shows us that the proposed Essential Freshwater policy package is one of the largest economic challenges posed to the dairy sector in a generation – its full effect could lead to a fall in our GDP of $6 billion by 2050, without even adding additional costs related to climate change,” said DairyNZ chief executive, Dr Tim Mackle.

“But what is really crucial is that we believe other options are available to improve and strengthen the protection of ecosystem health and we will be outlining these in our full submission.

“The proposed freshwater changes would result in significant declines in milk production and is therefore a serious threat to the international competitiveness of New Zealand’s dairy sector.

“However, water quality and emissions gains can still be made with less stringent reforms, at a lesser cost to the New Zealand economy. Farmers care deeply about the environment and have been doing their bit to protect the environment and our waterways for some time,” said Dr Mackle.

“They are absolutely onboard with continuing to play their part in improving our waterways, however stringent changes cannot be at the detriment of farming’s future and the communities they support. We need to approach this carefully, balancing environment and economy – we can achieve both goals by working closely together on this issue.

“The economic analysis shows potential significant impact. By 2050, total milk production is forecast to fall by 24 percent and all national exports by 5.2 percent or $8.1 billion.”

Tax revenue from dairy is also forecast to more than halve by 2050, with an annual loss of $0.54 billion at the national level.

The independent Sense Partners report commissioned by DairyNZ combined modelling of on-farm and community impacts of the proposed freshwater regulations, and the added effects of proposed climate change policies.

With the Zero Carbon Bill and its assumed reductions in methane considered alongside the Essential Freshwater reforms, the forecast showed an additional $1 billion loss ($7 billion) and another 4 percent reduction in milk production (28 percent).

The more moderate freshwater reforms, in isolation, are not expected to have the same degree of economic impact.

“Four scenarios were modelled and scenarios one and two, which include actions around fencing, farm plans, capital expenditure, consented stand-off pads and nitrogen caps in priority catchments, had less financial impact for farmers and therefore the economy,” said Dr Mackle.

“In contrast, the consideration of proposed nutrient limits under scenario three was forecast to impose a significant financial burden on the dairy sector. Research by DairyNZ also shows that these limits – broadscale introduction of phosphorus and nitrogen leaching reductions in monitored catchments – are based on overly simplistic relationships and not supported by robust science.

“It is under these more stringent reforms that dairy will struggle to contribute as significantly to the national economy, as it does now.”

“The proposed changes potentially compromise the vitality of regional communities, due to the importance of processing jobs as well as farm profits and expenses being a key source of revenue for other businesses,” said Dr Mackle.

“Less milk means 15-20 percent less jobs and reduced competitiveness in global markets. This is an issue because nearly one-third of exported goods and 46,000 jobs are associated with dairy production in New Zealand.

“The proposed Essential Freshwater changes constitute substantial business risk for New Zealand dairy farms, with the number of insolvent farms forecast to jump from 2 to 11 percent by 2050.

“Dairy is here to play our part but it must be done in a way that supports the community and all Kiwis while working towards improved water quality.”

To find out more about the DairyNZ economic assessment on the proposed Essential Freshwater package, view the reports at www.dairynz.co.nz/freshwater. 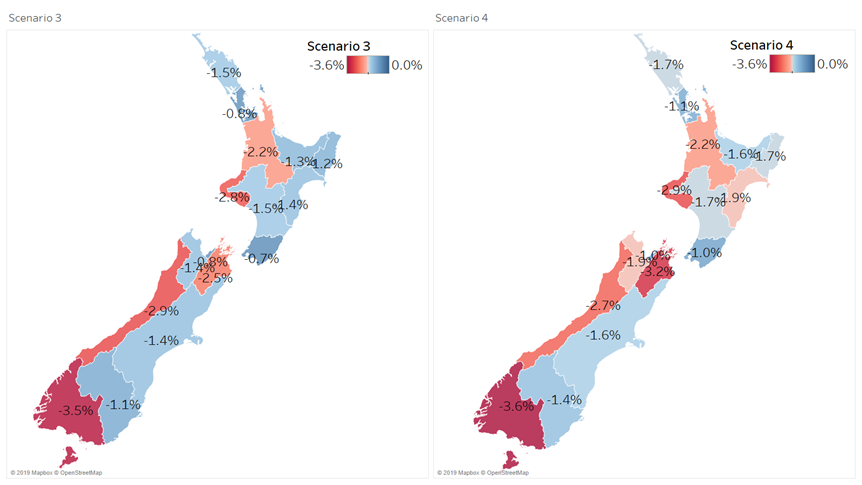 Government's freshwater regulations were released in August 2020. Here is a summary of those regulations and what they may mean for you.